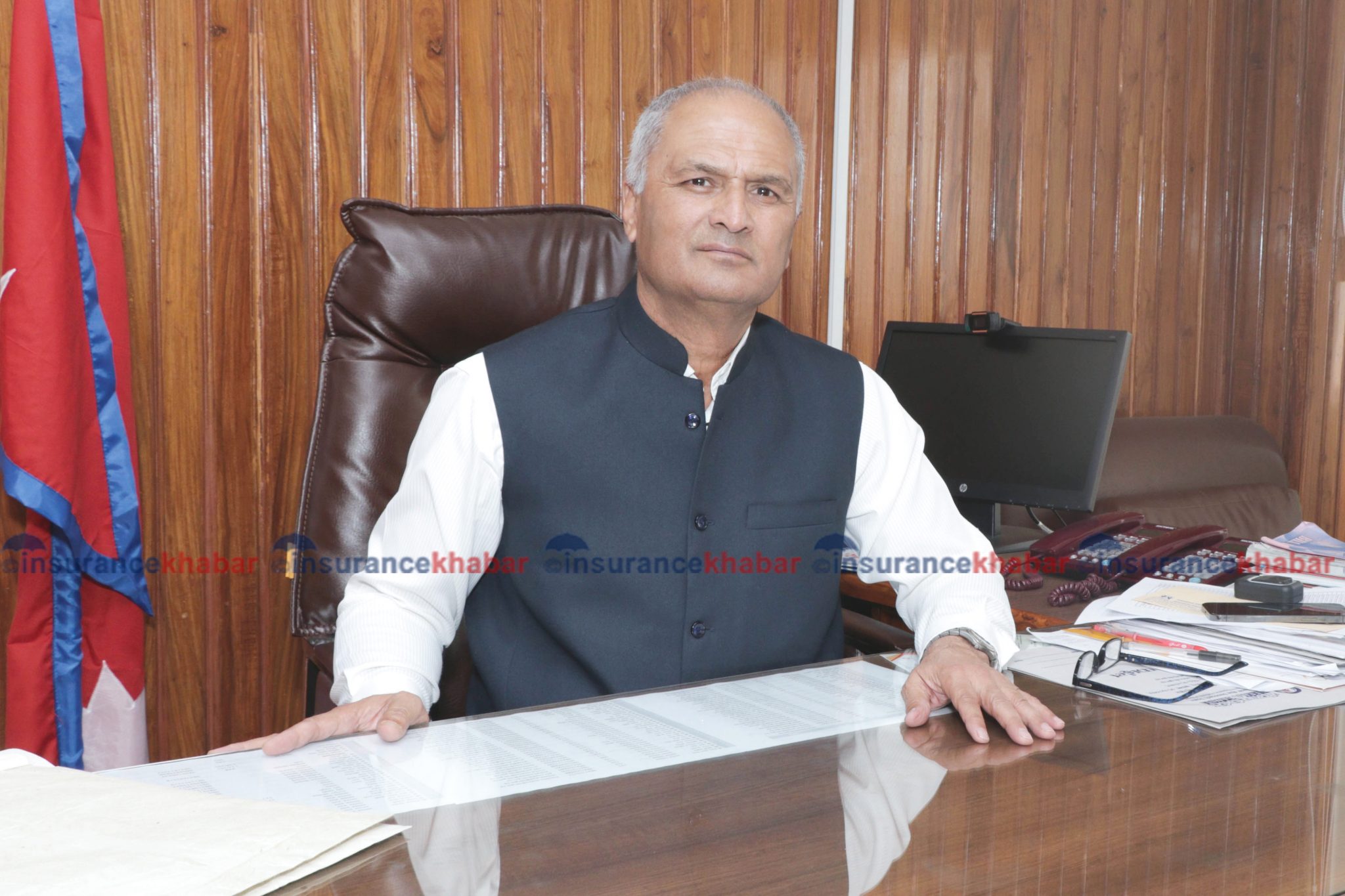 On the occasion of New Year and our 4th anniversary, we have interviewed Surya Prasad Silwal, the chairman of the Insurance Board.

Fourteen months have passed since you were appointed as the Chairman of the Insurance Board. After working in the administrative sector for a long time, you are leading the insurance industry. What observations have you made in your first year?

Assuming the chair of regulatory authority, I have to do four things specified by law. That means developing, managing, regulating, and controlling the insurance industry. After taking initiation with the same motive, we have to gradually overcome all the weaknesses that I have observed. At some points, we have become flexible and rigid on some other points.

Following the international trend, the Insurance Board made arrangements for risk-based capital. But why recently, the Board has instructed the insurers to increase their regulatory paid-up capital?

These are complementary to each other, not different things. The insurance companies are here to assume the risks. In the event of an accident, the risk is equal to the sum assured. If no claim received, insurers will make profits. Specially, in our geography there are diverse risks. Apart from this, there are all kinds of natural hazards. Nepal is one of the countries most affected by climate change.

Our study has observed that the current paid-up capital is not enough to bear the industry’s risk. We have also analyzed the statistics for the last 5 years. If you look at the risk situation, especially the life insurance company can cover only 8 percent of their total risk. Similarly, in the case of non-life, only 10 percent of the risk can be borne by the existing regulatory capital.

The current practice is that some insurers retain only percent risk and transfer the remaining 99 percent to re-insurers. We have to implement Risk Based Capital by 2084. It has been introduced to enhance the risks bearing capacity.

Most of the insurers are concentrated on the same geography and market segment. But we are much hopeful that with the increased paid up capital, insurers will be forced to explore new market opportunity to increase their return on equity.

Does raising capital control all these things?

All these things must be tightened from the side of good governance. The increased regulatory capital says is that if you have the ability, then invest more equity, if not, then go for merger.

The Board had directed the companies with cross holdings to disinvest their shares within two years. Why not to force them to merge rather than give them a chance to dive into stocks?

We have also had a correspondence in the meantime. You have seen such cross-holding. Work had collected the details of crossholdings and taken action to omit them. Some investors have already done the same. The good news may be that two companies of the same nature having cross-holding will be merged.

Investors in the insurance company are complaining that the doubled paid up capital will lower the company’s return. What do you say to the fact that in such a situation, the promoters are of the opinion for disinvestment rather than adding capital through right shares?

Even then you are not able to meet the capital requirement, then only right shares may be an option.

The study report of a committee formed by the board had suggested the establishment of micro insurance companies in order to expand the reach to micro insurance. But results have been observed yet.

You mean to say that they are coming soon?

Yes, they must come soon.

Some insurance companies have yet to issue primary share. Some companies have approached the Securities Exchange Board of Nepal (SEBON) seeking permission to issue IPO at a premium. But the SEBON doesn’t seem flexible to allow them. Now what is the role of Insurance Board in this issue?

Even companies that have issued IPOs have to raise Rs. 5 billion in paid-up capital. It is easier for them. One or two business plans have been received. Let everyone have a business plan first. After that we will reveal how to proceed.

Is it possible for a company that has not issued an IPO to be merged?

Why not? The road to merger is open to all. They can issue IPO after merger. Everything doesn’t happen just exactly guided by the law. Some hurdles have to be removed. We are trying to reach a goal. We are trying to set up a strong insurance industry in the country.

The Board has been revising the Institutional Good Governance Directive several times this year. But the Board seems weaker to strongly implement it.

Being a regulator, there’s some ethics of the regulator to be abide by. I belong to someone but only professionally. The company belongs to us. The companies must comply with the instruction given by the regulatory authority.

We have to support the company. But we cannot intervene the company’s operation and do unethical practice. What is lacking in those things? The first thing I think is that there’s lack of some control. Secondly, it’s also a human error. Some shortcomings have been observed. We are also reviewing that. Being a regulator, there’s no question of favoring someone and taking action against some others.