Kathmandu : Himalayan Reinsurance(Himalayan Re), the private sector’s first re-insurance company, is all set to issue initial public offering(IPOs) of worth Rs. 3 billion next fiscal year. The first annual general meeting(AGM) of the company concluded on Friday passed the proposal of BODs to  issue IPO to raise Rs. 3 billion from public.

The promoters of Himalayan Re have already invested Rs. 7 billion for promoters’ share. The companies authorized capital is Rs. 21 billion and paid up capital of Rs. 7 billion. After the issue of IPOs, the paid up capital will reach Rs.10 billion.
Himalayan Re is operational from 31 Asar 2078(July 15, 2021). According to the first annual report, the company has managed to earn a profit of around Rs.10 million in a short period of operation. According to the annual report of 077/78, the company has made a net profit of Rs. 9.426 million within short span of operation. 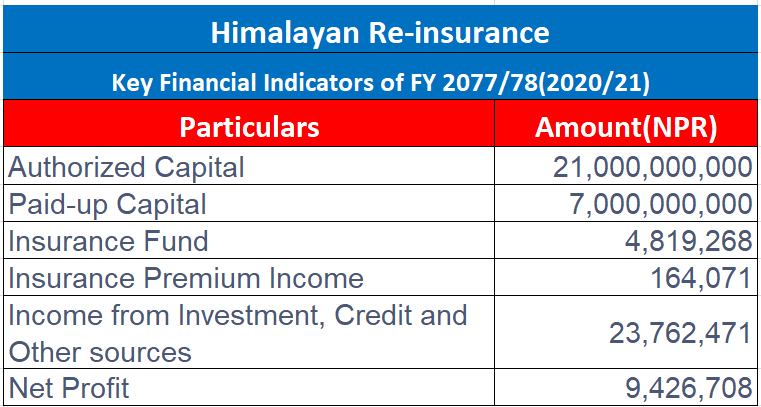 The company, which has officially started reinsurance service only from July 15, 2021, has earned a total of Rs.23.70 million from investment, loan and other sources. In the last fiscal year, the company has spent Rs. 1.687 million on management and other expenses.
The company, which has 21 billion authorized, 10 billion issued and 7 billion paid-up capital, has accumulated Rs 4.819 million in its insurance fund till mid-July last year.

Chairman Shekhar Golchha has announced that the company will increase its paid up capital to Rs 10 billion by issuing ordinary shares worth Rs 3 billion in the coming fiscal year 2079/80. As of the date of preparation of annual report, the company has earned Rs.120 million re-insurance premium.
“Even foreign reinsurers are affected by the Covid-19 pandemic. In the days to come, there is a risk that re-insurance of travel insurance and other insurance, including travel medical insurance, aviation insurance and trekking insurance, may not be easy and the cost of re-insurance may increase,” he said.
Chairman Golchha informed that re-insurance proposals have been received from global re-insurers and re-insurance brokers representing from 15 different countries. He expressed confidence that in the very near future, not only in Asia but also to the world, Himalayan Re will be a reliable name for re-insurance support.

Himalayan Re has a strong group of promotors representing the major corporate house and two major state-owned commercial banks i.e. Rastrya Banijya Bank and Nepal Bank Limited. The company has already assigned AM Best for its credit rating.