Kathmandu: The Insurance Board has written to the insurance companies for unpaid claims. Chairman Surya Prasad Silwal informed that a letter has been sent to the companies to pay the pending claims immediately. “We are waiting for the company’s response,” he said.  If their response is not satisfactory and the claim is not paid, we will take legal action. ‘ 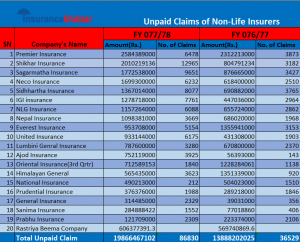 From the local people’s representatives to the general public, they have demanded the necessary intervention of the board for the settlement of pending claims.

As per the financial statements made public by non-life insurance companies in the last fiscal year, claims of Rs.19.86 billion are yet to be paid. Compared to the previous FY, the unpaid claims have increased by 43 percent.

If the companies do not pay the claim on time and are not satisfied with the assessment of the surveyor, there is a provision to lodge a complaint too the Insurance Board.  In this way, the insured has to wait for years to get the claim as Board also.