Kathmandu: Based on the fourth quarter financial report, life insurance companies have yet to pay claims worth Rs 4.65 billion. It means they have not entertained the claims of insured due to lack of full evidence for claim payment or due to false claim. 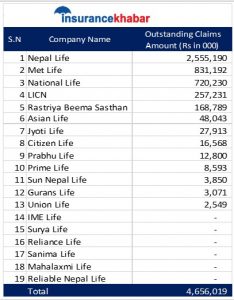 Note: As there is no data on the unpaid claims to be paid by the Rastriya Bima Sansthan, the data on the provision for claims pending at the end of the financial year has been mentioned here.