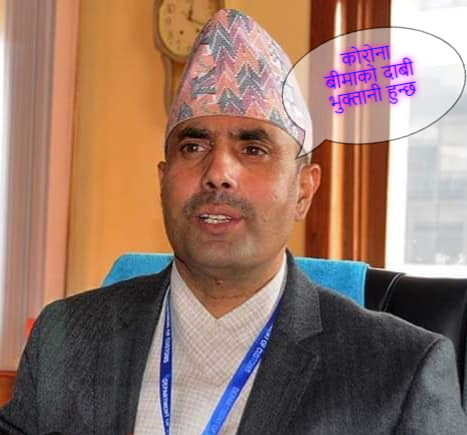 Kathmandu. Finance Secretary Shishir Kumar Dhuganna has expressed commitment to pay the Covid19 insurance claim. Commenting on the post-budget discussion organized by the Economic Journalists’ Society (SEJON), Dhuganna said that the government would pay the claims as per the Corona Insurance criteria. He said, “We have not been able to do much on it as we were under pressure for budget preparation.” After the budget, we will do something by analyzing it. ‘

He further added, “As per the assurance given by the Government of Nepal for Corona Insurance, the Govt will contribute if the total claim exceeds Rs 3.5 billion.”

The covid19 insurance claim has been pending since last year as the insurer are not able to settle the claim due to lack of fund. General insurance companies have already received claims of Rs 7 billion. But only Rs. 3.5 billion has been paid to the claimant.

The government has released Rs. 450 million only to the covid19 insurance fund.

Since the actual claim of covid19 insurance is much more than the premium earned by insurers, the government is reluctant to release more funds for it.

The government has not admitted anything about Covid19 insurance in the recent economic survey report and the budget for the upcoming fiscal year.

The non-disclosure of billions of rupees in the economic survey has raised doubts about the  Covid19 insurance claims payment.

The Corona insurance gap introduced with priority in the current fiscal year budget has failed. The Covid19 insurance scheme introduced by Beema Samiti and included in the current fiscal year’s budget by GoN has been proved futile. It was a policy-level blunder of the Beema Samiti to introduce insurance coverage against pandemics to favor a handful of general insurers. It has added an unnecessary financial burden to the government. On the other hand, it has been found that fake claims have been made to enjoy the benefit under the Covid19 insurance scheme.